In many ways the 1D is to digital what the Nikon F1 was to film. It was the first professional digital camera to be developed solely by Canon, their previous efforts such as the EOS-D2000 had been developed in conjunction with Kodak.

As with the F1 many of the features were upgrades and improvements to existing technologies brought together in one package. Also like the F1, it was aimed aimed at the photojournalist and sports photographer market. To Canon-using professionals converting from film, the 1D would feel very familiar. Its body was closely based on the the previous film based pro camera, the EOS 1v with the former’s optional grip being integrated into the latter. Canon also maintained its EF mount, first seen with the introduction of the EOS range of film cameras in 1987 ensuring backward computability with lenses, an important consideration for the professional market.

The evolution from film…. – photo by wolf4max, on Flickr 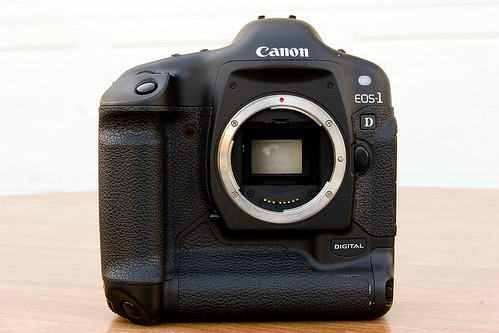 The headline feature of the EOS 1D was its sensor. The sensor itself was manufactured by Panasonic and unlike it’s consumer level sibling, was a CCD sensor rather than the more common CMOS, it was also only 4mp rather than the already available 6mp. The reason behind this was that the target market needed speed more than megapixels and by utilizing Canon’s own software, the 1D was capable of shooting 8 frames per second, a rate virtually unheard of even in film cameras.

Some of the other features included an X-sync speed of 1/500 of a second, and a shutter that went to 1/6000th of a second, both features that were a quantum leap over the previous generation of cameras.

Other evolutionary features included a 45 point area autofocus system and 21 zone exposure metering. Understanding the needs of professional photographers, Canon incorporated the ability to create custom modes, allowing photographers to tailor the 1D to their own requirements – a feature that has become standard now on all but the basic level DSLRs. As with the F1, Canon also recognized the need for toughness and reliability, the 1D’s body being made of lightweight magnesium alloy with all over weather sealing and the shutter was tested to over 150,000 activations. The camera was connected to a computer using Firewire as USB was still in it’s infancy and could not produce the upload speeds required for photojournalists.

When launched in November 2001, the 1D was the height of digital technology. Like the Nikon F1, the Canon quickly found a lucrative niche market – sports photography. Its large sensor, for the day, featured a 1.3 crop factor, it had a highly responsive shutter of just 0.55 of a second and its 8 frame per second speed made it the perfect sports camera. This was supplemented by the relatively low noise of the sensor, allowing sports photographers to obtain low light images previously unseen in the days of film.

The lessons learnt from the success of the 1D allowed Canon to make a huge leap forward, just one year later with the 1Ds. Reverting to  a CMOS sensor this camera pushed the resolution up to an unheard of 11.1 megapixels yet maintaining the 1D’s reputation for low noise and excellent image quality.

Sports photography was one of the 1D's most successful areas – photo by matze_ott, on Flickr

Perhaps the most lasting legacy of the 1D can be seen in any sports arena in the first years of the new millennium. Virtually every sports photographer’s camera fielded Canon’s iconic white L series lenses – a virtual stranglehold on the sport photography market that went unbroken until Nikon’s introduction of the D3 took low light photography to a new level in late 2007.

In the next in this series, we will take a look at the camera that helped create such photographic legends such as Henri Cartier-Bresson, Robert Frank and W. Eugene Smith. Leica’s iconic M3.