In the last of this short series of iconic cameras, we are going to back in time a little and away from the single lens reflex models to what is arguably one of the most iconic cameras of all time, Leica’s M3 rangefinder camera. 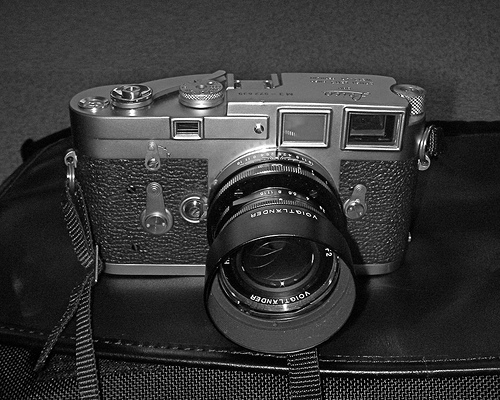 The Leica M3 by Jim O'Connell

By the time Leica released the M3 in 1954, they already had a worldwide reputation for the highest quality cameras and lenses. Unlike the Nikon F1 and Canon 1D we discussed in previous articles, the M3 was revolutionary, not evolutionary – it introduced and refined several important technologies to the Leica range that found their way, eventually into most other manufacturers cameras and to a certain extent exist even today.

Perhaps the most important new technology Leica introduced was the bayonet lens mount. Until the M3 all Leicas and most other cameras had used the unwieldy screw thread type of lens mount. The bayonet design enabled photographers to rapidly change lenses and keep up with the action, a real advantage for photo journalists. The DNA of that bayonet mount lives on today in Leica’s superb range of lenses, all of which will still fit the M3. An adapter was created for the pre M3, screw thread lenses, ensuring that owners of previous Leica models would still be able to use their existing lenses. 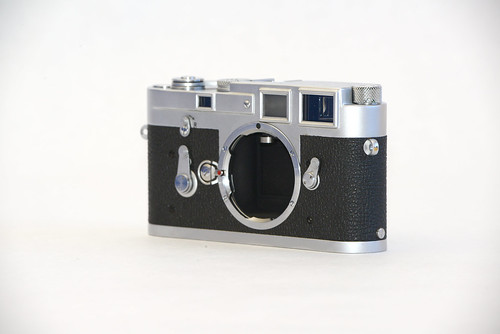 An M3 showing the bayonet mount by 9999x, on Flickr

The M3 also featured a newly designed viewfinder that was much larger and brighter than on previous models and introduced framelines to correct parallax, a major problem for rangefinder cameras, especially when composing close up images. The framelines within the viewfinder also adapted to different lenses. The viewfinder had a 0.92x magnification, much higher than other cameras, allowing the photographer to attain much more accurate focus.

Another of the M3’s key features was the introduction of a film lever as opposed to the older film advance knob. Initial M3s had a double stroke lever, as there was the worry that rapidly advancing the 35mm film could tear it, although later models moved to a single stroke. The shutter was cloth based focal plane with speeds running from 1 sec to 1/1000 sec, again a very high speed for the era. An important feature of the shutter was that it was near silent, a huge advantage to street and documentary photographers.

The M3 continued Leica’s reputation for exquisite design and build quality. The movement of every moving part was silky smooth and the camera’s ergonomics were simply way ahed of their time. Although the camera contained no built in light meter, Leica had a an accessory, the Leicameter. This was an uncoupled meter, that sat on the hot shoe and allowed you to determine exposure via dials on the top. The correct exposure would then be transferred manually to the M3.

The combination of all these factors led to the M3 becoming the ultimate photo journalist camera of its time. The list of names that used the M3 reads like a who's who of photographic history. Perhaps one of the most famous users of the M3 was Henri Cartier-Bresson, the French street photographer who used his M3 with numerous lenses, his favorite being perhaps the Summicron 50mm. One of his most famous images, On the Banks of Marne was taken with an M3 and 50mm lens. Other greats that used the M3 include, Robert Frank, Robert Capa and W. Eugene Smith.

The M3 remained in production until 1966, with various modifications being made during it’s lifetime. It sold over 220,000 units making it the most successful Leica of all time and resulting in a healthy second hand market for them even today. A good quality M3 will set you back about $1000 even these days, with the single stroke film lever version generally fetching higher prices. Of course this is a body only price, adding a decent lens to this will certainly more than double that.

The Leica M3 remains one of the single most important cameras ever made, a true photographer's camera, that allowed the user to compose and focus easily, rapidly wind the film on and in some cases, create some of the most iconic images in the long history of photography.

Long ago I used a Leica M3 as a wedding photographer. Shot on average 10,000 pics a year, dropped it on a marble floor in church, used it in below zero and 95+ degree heat, not a whimper. Had the F2 dual range Summicron 50mm. Wonder where it is now. Recently got an M2 with a Summicron 50mm. There’s a feeling you get just holding one of these that no other camera can match. Certainly none of today’s digitals, no matter how good or pricey. A Leica is a Leica is a Leica.

On the banks of marne is 1938 photo, and Robert Capa dies in May 1954. How could Robert use the camera, when it was introduced in Photokina 1954, which was held in September? And how could Henry use M3 16 years before it was produced?

There is a slight error in your description of the Leicameter: The first Leicameter for the M was the selenium, non battery model and, like subsequent meters that were battery powered, are coupled to the shutter speed dial. Many opine (as is often the case) that the reason the M3 shutter speed knob is so small, is that its intended to be turned by the larger wheel of the Leicameter. So, you determine that you want to shoot at 500 for 400 iso film, you point the Leicameter at your scene and the needle point to the aperture needed. You then set this on the lens. I have been using a 1955 double-stroke M3 and Leicameter MC (Selenium) for 9 years and was using it this afternoon. I have the 35 specs, 50 collapsible and 90 Elmarit, all f2.8.

The Leica M3 is rapidly going up in value. When I bought my M3 body in 2007 it was £299. It’s a 1955 double stroker, some braising and wear on the body but no dents. Vulcanite is undamaged.
I mainly use a 50mm f2 lens on it as the 50 frame is constantly visible in the finder. Rangefinder lenses have really good depth of field markings that often obviate the need to focus using the rangefinder. The camera is a delight to use and I’ve travelled far and wide with it. I meter with a Weston Master V meter for reflected & incident.

,some brassing and wear on the body but no dents.

I’m a little fed up with this Apple iPad , it changes what I write!

You have to check the spelling, David dear boy, before you press the go/send/reply/post comment button. I too despair of the foibles of artificial intelligence! One of the advantages of the M3 is the absence of a video screen on the back. I sometimes take a shot then lower the camera and, holding it away from me, look at the back of it. Makes the chavs think I’ve got something I plugged into the mains overnight.