In this, the first of a short series, we are going to take a look at some of the camera’s that defined modern photography. These cameras may have introduced new, revolutionary features or just refined the existing technology into something much more usable. In this first article, we will look at the Nikon F.

The Nikon F is perhaps a classic example of how the balance of power can shift in an industry. Introduced in 1959, its first revolutionary feature was that it was Japanese. The early decades of 35mm photography had been dominated by German camera manufacturers such as Leica and Contax, Japan had an industry but it was mainly aimed at the cheap, consumer end of the market. The introduction of Nikon’s F changed this forever, bringing high quality 35mm SLR’s within the price range of many more people than it’s German equivalents and led the way for the Japanese take over of the camera industry. Photo by Chris Carzoli on Unsplash

Oddly, very little of the F’s technology was revolutionary, it merely borrowed and bettered existing technology. Some prime examples of this were it’s pentaprism viewfinder, instant return mirror and bayonet mounted interchangeable lenses. It was the Nikon’s addition  and refinement of many of these existing technologies that made it such a potent new addition to the photographic world. Much of the design of the camera was built around making the user operation much easier and giving options for a huge range of lenses and accessories. One revolutionary feature was the ability to add a motor drive to the camera allowing the photographer to shoot up to 4 frames per second, a first in a 35mm SLR, this combined with its range of high quality lenses made the Nikon extremely attractive to photojournalists, many of whom had been working with exquisitely made but fairly slow to use, Leica cameras. Amongst the other many useful accessories available were a 250 exposure back, interchangeable focus screens and different viewfinders. 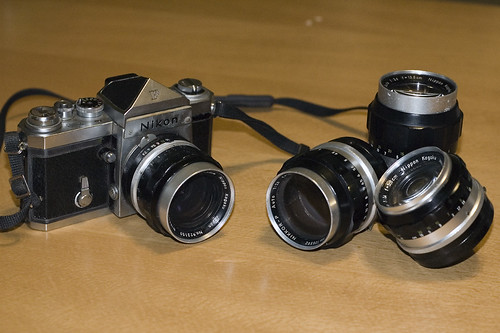 A Nikon F with a selection of lenses – photo by shashchatter, on Flickr

Perhaps the single most important aspect of the design of the camera was its build quality.  Nikon realized that to corner the photojournalist market, the camera need to be built like a tank, capable of taking the roughest knocks in the wildest of environments. That they managed to achieve this quality, with so many features, all for a relatively low price for the time is testament to Nikon’s engineers.

Like so many iconic products, it sometimes takes a major event to raise its profile to worldwide recognition and in the Nikon F’s case, this was the Vietnam war. By the start of the war, the F already had a good reputation for it’s build quality but in the brutal killing fields of South East Asia, it really proved it’s worth. War photographers such as Larry Burrows and Don McCullin would have several bodies and lenses in their kitbags with both of them, as well as others, bringing back some of the most important and striking images of that conflict. For Don MacCullin, the Nikon F was a life saver, literally, when one of his was hit by a Vietcong bullet whilst it was hanging round his neck. 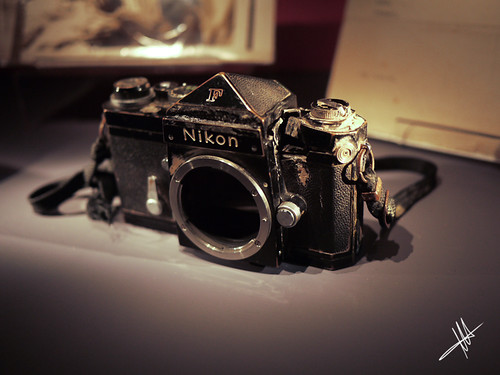 The Legendary Life Saving Nikon – photo by martsharm, on Flickr

Production of the F continued until 1972 when it was superseded by the F2. All in all, over 850,000 were produced, and even today it’s still fairly easy to buy a used Nikon F in good condition. The F set Nikon on its route to being one of the worlds most respected manufacturers of professional camera equipment, and although the F series ended its life in 2004 with the Nikon F6, its heritage continues with the Nikon D series – currently at D4. Even to today, all of Nikon’s DSLR cameras contain DNA from the Nikon F, perhaps most notably in the legendary Nikon F lens mount, which allows even the most modern Nikon professional cameras to accept lenses designed for the original Nikon F.

In the next article in this series we will take a look at perhaps the first iconic camera of the digital era, Canon’s EOS 1D.

I currently have four Nikon bodies: F2, F3, FE, and MF10. My F2 was manufactured in 1972. Over the years, I’ve collected approximately a dozen lenses. Will any digicam last as long? I have a nice little DSLR, but it’s about 4 “upgrades” out of date…and I’ve had it five years. I have 40 years experience with film. Nothing against digital, but I doubt I have enough time left to “learn it.” Thank you for a tribute to a wonderful camera.

You are right, Mr. Schreiber, don’t waste your time with digital gear, those classic cameras rule! Although I’m only 27 years old, I own a Nikon F from 1970 and I think it’s the best camera I’ve ever had.

I have used old Nikons and Nikkormats since 1981 and currently have 2 plain prism F and one EL2. I can confidently predict that you will still be using your F when you are 70! The build quality of cameras, lenses and accessories is fantastic and far above anything made today, perhaps with the exception of the Leica M-A
Basically an M3.

I own an F3 (non-HP) and an F2AS and recently purchased an F to complete my collection of manual pro Nikons. I actually don’t really use the F3, my main camera it the F2 and I looked for it for ages. I wanted a black camera in good optical condition that was built in my month of birth. Managed to find it after some months. The F will be the secondary body so that I can shoot color and BW. I love those beasts.

I am the proud owner of an F60, not released in America courtesy of my father.

I have a Nikon FTN and a F2. A few years ago I purchased a Nikon D40 digital. The D40 is now as obsolete as the FTN & F2. Not being a big fan of digital photos, I decided to give digital a fare chance. In my testing and practicing I took my 105mm lens off my FTN and used it on the D40 body. It worked great. I still feel film photos are superior to digital photos but one thing is consistent. You can screw a milk bottle on a Nikon and get a good picture.

I have a Nikon F Photomic FTN chrome body, metering head dud (like most of them, and a plain prism chrome F. I have collected contemporary lenses to use with the bodies 20/28/35/50/85/105/135/200/300mm. I keep all this in the most ancient, faded and tired-looking Billingham Safari bag you could imagine. However, I derive the most exquisite pleasure in using my vintage Nikon kit together with a Weston Master V meter and Invercone attachment cone. Film is Kodak Tri-X. Negatives are scanned onto a disk so my vintage Nikon kit is also a digital camera!

You might be able to fix the meter. I bought an old F w/FTn with a non-functioning meter cheap and didn’t even have to disassemble it to get it working. It’s worth a look, and it’s not like a non-functioning head is going to be worth less if you fail.

I have a couple of old F bodies, plain prism, 1 black, one chrome. The chrome body has a couple of pieces broken out of the mirror at the bottom. The viewfinder in the black one is slightly cloudy. I bought an 85mm f1.8 H lens from Grays of Westminster and together with a Gossen Lunalite meter, I built my portrait photography business with these 4 bits of kit during the past 8 years. I can thoroughly recommend Grays of Westminster for anything Nikon, especially the vintage stuff. I get real pleasure in using this kit and when I bought the 85 I got 12 months warranty even though the lens was made in 1967. Grays is the place to buy focus screens as these can help in composition and viewing, also the correct lens hood is vital to keep out flare that can ruin your shot.