Photography has always gone through phases and fashions, both in the style of the imagery and of course the technology we use. At the moment the DSLR is perhaps on the wane whilst the upstart is mirrorless. However, through these changes in fashion, one camera type has always sat in the background, quietly being used by a select group of enthusiasts and professionals alike – the rangefinder camera. Today we will take a little look at what a rangefinder camera is, a little of its history and what it can bring to your photography.

What is a Rangefinder?

These days, most of us, when we look through a viewfinder, we see almost exactly what we are going to take. A modern DSLR uses a mirror to reflect light out of the path of the sensor and into the viewfinder, when we press the shutter, the mirror flips out of the way and an exposure is made. This, of course, involves quite a lot of relatively bulky mechanics, meaning that film SLRs and DSLRs have never really been made to be small and discrete.

The rangefinder solves this problem by having a viewfinder entirely separate to the lens, removing the requirement for mirrors and pentaprisms. The name rangefinder comes from the focussing mechanisms used inside the viewfinder, which on most recent models is coupled to the lens.

It works by effectively having two viewfinders, one for the photographer and a second one on the opposite side of the lens for determining focus. When you look through the viewfinder, on an out of focus subject you will see the two images, out of phase, when perfect focus is achieved, the subject will be visually in phase, i.e. you will not see a ghost image. Some rangefinders have a fixed non interchangeable lens, others most notably the Leica system have a complete range of lenses. 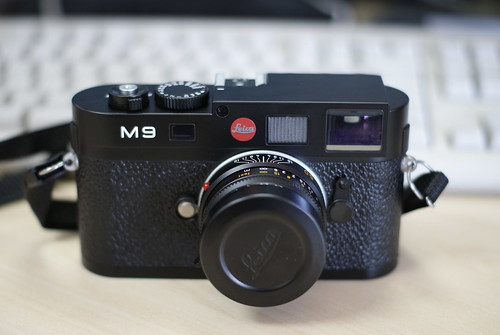 Where Did Rangefinders Come From?

In the 1920s there was a trend towards using accessory rangefinders to obtain focus. These attached to the camera and allowed the photographer to calculate the distance to the subject and transfer the data to the lens.

In 1932 both Leica and Contax introduced cameras, the Leica II and the Zeiss Contax I respectively, that integrated that rangefinder apparatus into the camera body itself. Because of their small size, bright viewfinders   and the ability to focus fast. They became the tool of choice for photojournalists, documentary and street photographers.

They remained in vogue until the early 1970s but the advent of the SLR camera from the 1960s began the seriously cut into their market. By the 1950s rangefinders were readily used by many types of enthusiast photographers, not just professionals. There was a large supply of budget cameras, many with fixed lens and leaf shutters as opposed to more expensive options like Leica M series which had interchangeable lenses and focal plane shutters.

The Rangefinder faded into the background from the mid 70s but never really went away. As well as Leica, Nikon, Canon and others still produced excellent Rangefinder cameras. Even the digital age did not eliminate the rangefinder. In 2004 Epson introduced the R-D1, the world's first digital rangefinder. Since then Leica had gone on to produce a number of high end rangefinder cameras and Fuji has had great success with its rangefinder style x100 and x100s cameras. 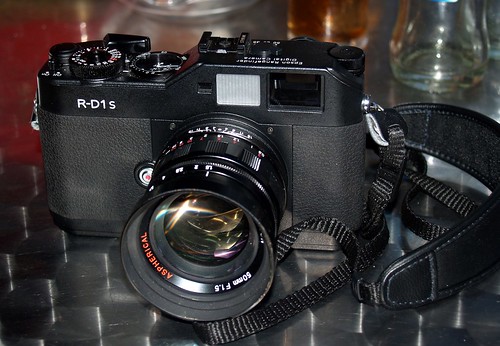 The first rangefinder of the digital age] by sukiweb, on Flickr

Why should I use a rangefinder?

First of all, rangefinders, both film and digital are not everyone’s cup of tea. They are quite hard to learn, particularly focusing.

The most documented issue with rangefinders is the viewfinder. That's because the viewfinder is not aligned with the lens axis, you get what is known as parallax – the closer you are to a subject the more off centered from the actual viewfinder it becomes. Modern rangefinders counter this with indicators in the viewfinder showing the amount of parallax. Indeed the Fuji X100 uses an electronic heads up display to project the actual image framing inside the viewfinder. Other issues include limited ability to check depth of field and of course, not being able to see the effect of a polarizing or graduated filter. 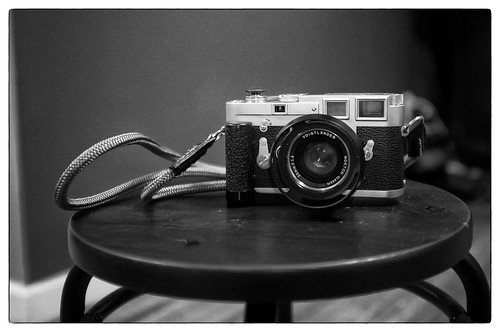 Perhaps the greatest rangefinder of all, the Leica M3 by celluloidpropaganda, on Flickr

Of course, the rangefinder’s longevity comes from its advantages, the prime one of these being its viewfinder. These are many times brighter and have a much more than 100% view when compared to DSLR viewfinders. This allows the photographer to both work and focus fast and to see beyond the confines of his actual framing. This combined with the lack of moving mirror make the camera ideal for street photographers and photojournalists.

The lack of mirror also means no mirror slap. This is the vibration that goes through a DSLR when the mirror returns to its lowered position after exposure. It is an often unrecognized cause of camera shake. The rangefinder by eliminating this and because of its size can potentially give sharper images at lower shutter speed, again a boon for street and documentary photographers.

Rangefinders have a long history in photography, they fill a unique niche and judging by the recent minor resurgence of new digital models, they will be around to stay for quite awhile longer. I have one, and I love it, I am sure many of you would too.

Thanks, I learnt nothing. I’ve had a Leica MP for 15 years and have found absolutely no reason to favour it over an old Pentax MX or Contax T for size, or a Sony RX100 if data is your preference. Your article has left me none the wiser as to why anybody would prefer a rangefinder film system. They are useless for macro work and useless for long lenses. A good reason to ‘suffer’ the limitations of an M is the lenses, which are second to none. I’ve yet to discover another reason.

Sorry you dislike my article so much and that you did not learn anything. Thing to bear in mind is the article was written as an introduction to rangefinder cameras to people that have not owned one before and as such might be of interest to them. As the owner of a Leica MP for 15 years, you are not really the target demographic here but I am sure there are plenty of other article on Lightstalking that may hold your interest more.

Thanks for enlightening us with your experience and opinions Flicky. Your obviously superior knowledge is wasted not being available in a published format, what a shame. Perhaps you could point us to >your< blog, where we could bow to your shining examples and learn something that's, apparently, "useful"?

Jason – I've had Canon SLRs for over 25 years, just considering my first rangefinder. Very useful article, and most informative to a rangefinder novice like myself. Thank you, it will help me with my purchasing decision enormously.

Then why did you get an MP, when an M5 would’ve done the same thing? M lenses aren’t “second to none”, by the way. Not everyone prefers that contrast and saturation.

I found your article most enlightening for a novice. Many just go out and buy a DSLR because they are advertised and have no idea what they are purchasing and if there are other choices.

The rangefinder is a wonderful tool. As for tele shooting I use my feet and forget the long object on the front of the camera some like to call a lens. But, others call an intrusion into their space.

As for shooting macro, few do it and there are other options aside from a DSLR to accomplish that task. Say a nice set of bellows.

Again, thank you for presenting an option that is not too often advertised.

As a combat photographer in Viet Nam I used a rangefinder because the slap of the mirror on a SLR brought in coming fire.

Harvey thank you for your insights into your experiences with rangefinder cameras. As a Vietnam photographer I can only tip my hat to you, I cannot begin to imagine the things that you captured.

As in my country say “para los gustos los colores” meaning all of us have different likes and tastes. The rangefinders are very useful for street photography mostly since they are good at taking pictures in low shutter speed, its a camera for a specifc purpose don’t get the wrong idea it’ll be a multipurpose camera.

What advantages does a rangefinder have over current highend mirrorless? Think Gh4for video and size, think fujis amazing cameras and retro styling, think Sonys groundbreaking a7 and a7r if fullframe is your thing and think olympus with their great lens range and omd lineup. Plus the prices are so much lower. Seems leica is becoming a fashion accessory more and more these days.

why a rangefinder over a mirrorless

No batteries… Mirrorless eats your batteries.

Hey Jason
That the return of the mirror in a SLR camera should cause shaken pictures, does not make any sense. You said it yourself. The mirror returns after the exposure. This may shake the camera but not the picture.

Its actually a slight error on my part. The mirror slap occurs at the end of the mirror rising and when the shutter is open and not as the mirror closes. It’s most prevalent when the camera is mounted on a tripod and can cause slight blurring in long exposure shots. This is why some higher end DLSRs have a mirror lock up.

My goodness. Aside from a little bit of nastiness I learned a lot from Jason about rangefinder cameras.
Thanks, Jason, and I’ll ignore the smart asses.