In today’s marketplace, it’s easy to find cameras with rugged, durable bodies constructed of magnesium alloy frames and polycarbonate exteriors; with state of the art sensors and so many advanced features that you may never get around to using. Even many point and shoot cameras pack a pretty hefty punch in terms of feature set and durability. And with so many options available to every level of consumer imaginable, a quality camera can be obtained by just about anybody who wants one. So why would anyone in their right mind choose a camera that uses film and is made almost entirely of plastic?

Because these so-called toy cameras are fun, that’s why.

And there are a few other reasons.

Toy cameras aren’t necessarily toys, though a number of them were originally designed for children; they are, in fact, fully functional cameras with few or no controls that produce photographs which can present with some, dare I say, unique characteristics. The simple, no-frills lenses mounted on these cameras are rife with all sorts of optical aberrations — light leaks, vignetting, blur. And, perhaps ironically, this is precisely why photographers, even some professionals, are fascinated with toy cameras. Not to mention that they are budget friendly and can add a brand new wrinkle to your creativity.

The Golden Half is a miniature sized 35mm film camera that is capable of creating diptychs (the merging of two individual shots onto one frame) in-camera, thus, effectively doubling the number of exposure you can get with a single roll of film. The camera sports a 22mm lens, a shutter speed of 1/100, and two apertures: f/11 and f/8.5. 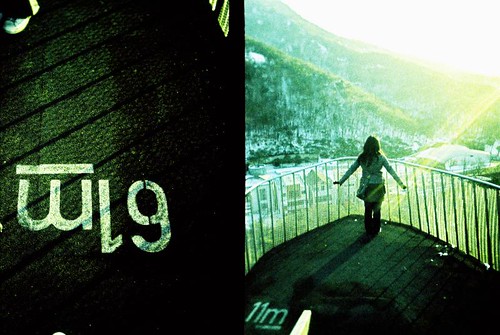 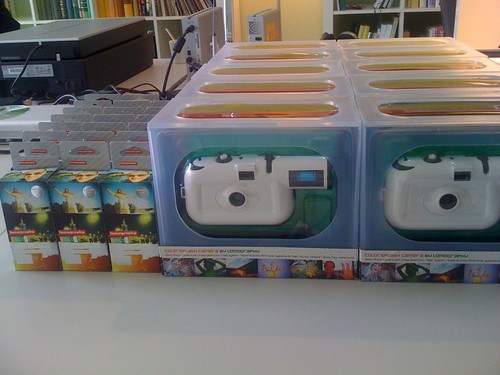 The Lomo Colorsplash camera allows you to add a “splash” of color to your photos via the integrated flash Color Wheel — which is essentially a set of rotating flash gels. You can choose a shutter speed of 1/125 or bulb mode. Combined with its long exposure capability, flash, and color casting, the Colorsplash camera can produce some rather distinctive images. 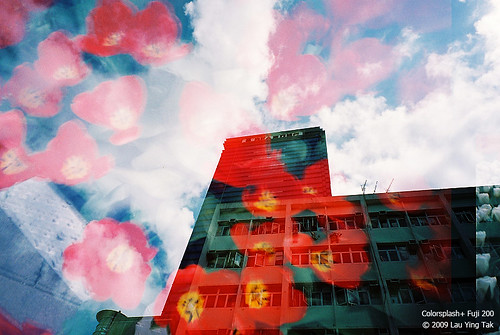 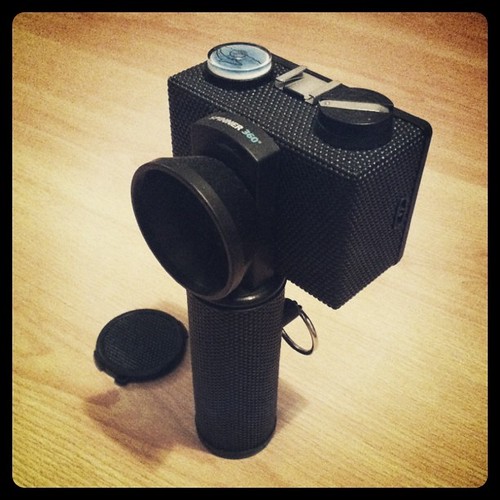 A toy camera capable of 360-degree panoramas? Of course! The Lomo Spinner employs a rubber band drive that you control by simply tugging on the attached cord. Just grasp the handle, release the cord, and capture the world around you — literally. Exposure speed is controlled by the speed with which the cord is released. The camera also features two aperture settings — “sunny” and “cloudy” — and a tripod mount. A 36-exposure roll of film can make up to 8 panoramas. 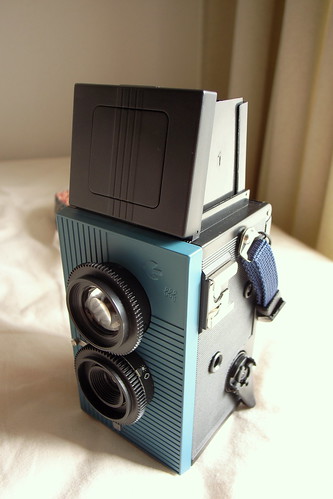 The Blackbird Fly (or BBF as it is affectionately referred to by enthusiasts) is a twin lens reflex camera, meaning that while one lens exposes the film, the other serves as a waist-level viewfinder. The camera features the ability to output three different formats: standard 35mm, square format (24mm x 24mm), and large format (36mm x 36mm). 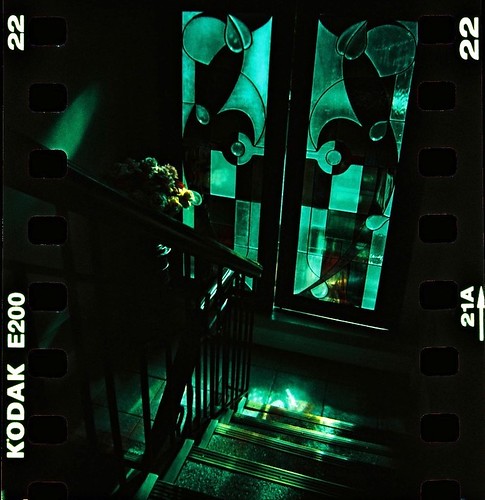 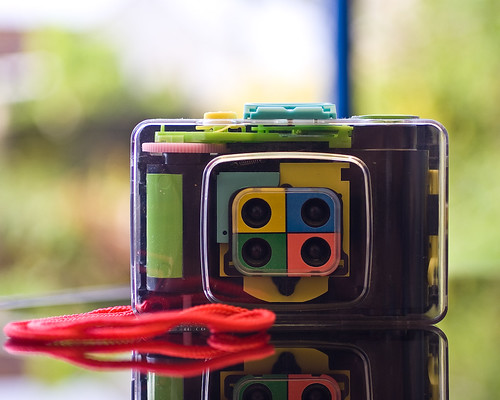 The Action Sampler is a miniature camera comprised of four 26mm lenses, designed to take a sequence of four photos and capture them on a single frame of film. The camera has a fixed shutter speed of 1/100 and a 0.22 second delay between each exposure. 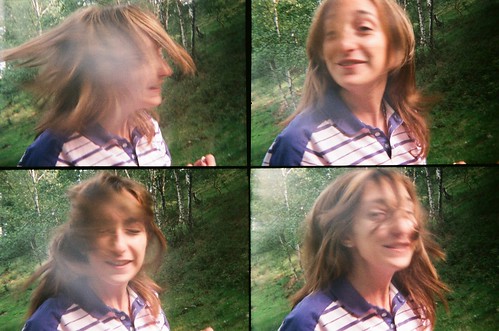 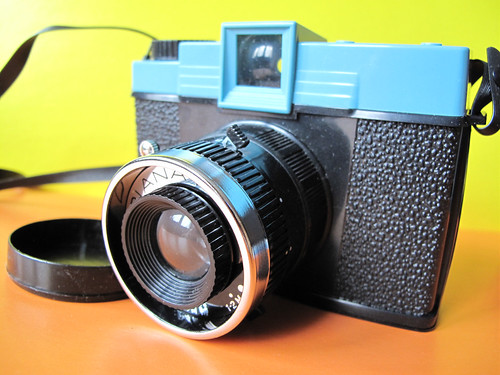 With its characteristic soft focus and frequent light leaks, the Diana F+ is one of the most popular toy cameras on the market, and with good reason. It can use either 120mm or 35mm film, features two shutter speed options (for standard daytime shots or unlimited long exposures), and has the ability to produce multiple and partial exposures. The Diana also features a hotshoe adapter for a flash unit, a tripod mount, and can accommodate other lenses. There is also a wide variety of options and accessories available for the camera. 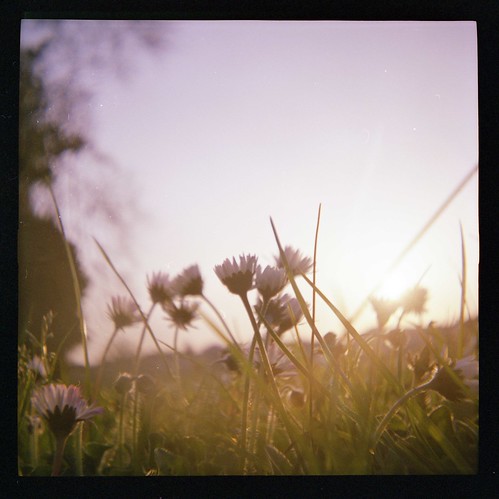 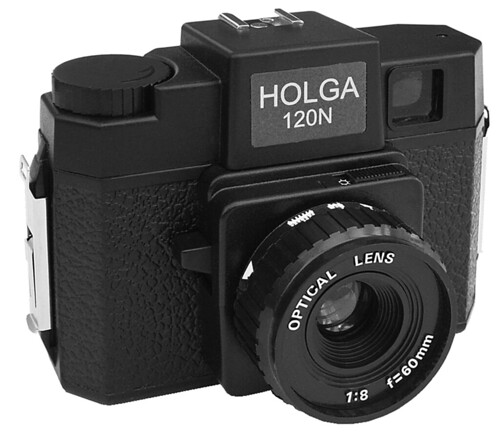 This quirky medium format camera is occasionally characterized as having the “worst optics ever,” but remains popular due to the unique imagery it produces and for all the creative ways the camera itself can be modified. Despite the light leaks and the notoriously difficult task of loading film into the camera, the Holga enjoys a loyal, thriving fan base. 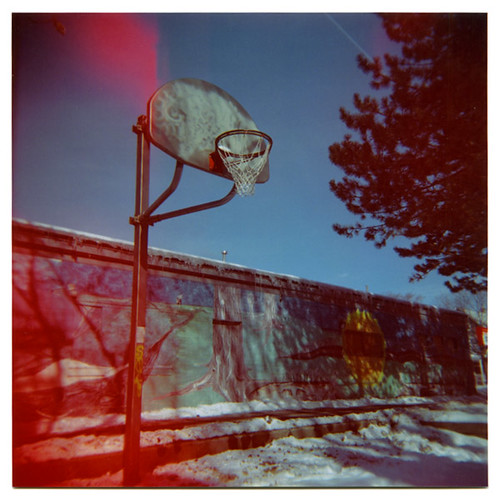 As you have hopefully been able to gather from the few examples here, toy cameras are hardly children’s playthings. And they don’t sit quietly on shelves waiting for novices and amateurs to give them a new home. Photographers of all skill levels have used their creativity to take advantage of all the oddities associated with this particular class of camera. Toy camera photography is even exhibited in respected galleries and art shows. David Hobby, a distinguished  professional photographer, has used gear as simple as a $20 Buzz Lightyear camera to make photos that are better than what many people can do with a top-of-the-line DSLR, proving yet again that it really is all about the individual behind the camera…not the camera itself.

So if you’re looking to challenge yourself, to expand your artistic vision, to increase your knowledge of photography in general, or to just have some fun, put some serious consideration into buying yourself a toy camera. There are many more options available than the ones listed here — as I said, there’s a camera to suit every need. And best of all, you’ll probably have some money left over. Which is good, because you’re going to need a lot of film to feed your latest photography-related addiction.