I've been on the fence about HDR for quite sometime now. It's often overdone and over used which is sort of off-putting, but at the same time I couldn't keep my eye from being drawn to it. When done in just the right amount, HDR photographs look quite stunning. I thought to myself, “Well, creating stunning images was something I'm interested in doing,” so, after some internal debate, I gave HDR a try for myself.

I'm certainly not up to par with the likes of Trey Ratcliff, but I have learned quite a few things in my foray into HDR landscape photography. I'll share some of this knowledge with you here since you probably want to make stunning images, too. 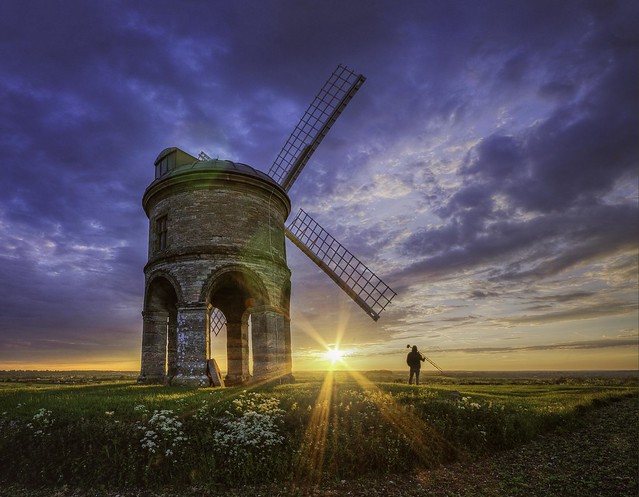 Photographers At Work – Mr Rivett & The Windmill by Fiona McAllister Photography, on Flickr

Tripod or No Tripod: I like to make things easy and that means keeping my camera bag light. I love the benefits that a tripod gives, but do I like carrying one over 5 miles of mountainside? No, I do not. (Warning: This is the point where I really upset our tripod enthusiasts.) It is possible to create HDR images without a tripod, but I've learned that this really depends on what I'll be photographing.

If I'm taking long exposures, I will always break down and pack the tripod. If lighting conditions are good, I like to press my luck and go without or just pack a monopod. Also, if the location I'll be shooting from is easily accessible by car or foot, I'll fill my camera bag up with extra equipment since I don't have to worry about lugging it over rugged terrain. You can also enlist an assistant to help do the heavy lifting, but they usually catch on to the fact they are pack mules pretty quickly and might get a little grumpy. Do this at your own risk or pack a pair of loud headphones to drown out the whining.

Here is one of my very first attempts at an HDR image. It is from three different RAW files and each were shot handheld.

Less Is More: Referring back to the above photo, this is one of those examples I spoke of earlier where the HDR effect is a little overdone. I started noticing that this is a common mistake of people just getting started in HDR. It's like we want to make sure that the viewer knows it's HDR so we play in post processing to the point where the image begins to look unnatural. Avoid this rookie mistake and tone it down, in the case of HDR less really is more.

Planning Ahead: You'd think this one would go without saying, but location scouting can make a huge difference in your photography. It's not just about finding a pretty scene, either. Go one step further and take into consideration all the other things that help make it beautiful. For instance:

There is usually more to a great image than seeing something gorgeous and snapping a few photos of it.

Take the panoramic shot we see above, for instance. I took this one in late June during a very sweaty heat wave. I just happened to glance out my back window at this gorgeous sunset and saw the need to photograph it. I'm glad I did, but had I planned it out I would have taken this shot earlier or later in the season when it was cool enough for the horses to be outside adding interest to the pastures. We are treated to colorful sunsets on a fairly regular basis around here so it wouldn't have been an issue.

Shoot RAW: ...and process on a powerful computer. I've recently ventured into panoramic HDR landscape photography and sometimes a single project I'll be working on will consist upwards of 25 RAW files. That's a lot of pixels to process, just ask my poor notebook PC. It can be slow going processing and applying all adjustments to that large of a file. So either be prepared to take breaks between each edit or invest in a computer that is capable of powering through that much information in a blink of an eye.

That being said, I run into a bit of a catch 22 here. As mentioned, I have a notebook PC with a moderate screen resolution and a powerhouse iMac with Retina screen that makes just about any image look 10 times better than it actually is. Because of the Mac's exceptional image display, I actually prefer to do my editing on the not so exciting notebook. My philosophy behind this is that a lot of folks don't have a fancy Retina display to look at all my photographs on. What looks good on my Mac, may not look so hot on my notebooks less-than-par screen, but what looks good on my notebook, looks exceptional on my Mac. So I edit everything with the assumption it is going to be displayed on a lesser quality display. This means no matter what type of display a viewer is using, at its very worst my image is still going to look good.

Above all else, photography is an endless lesson in patience and understanding. Every time you take a photograph (and you'll be taking a lot in HDR) think of it as a learning process. One thing I've noticed getting into an HDR state of mind has helped me with is improving my ability to see the light. Of course, looking for the light is one of the rudimentary elements to photography, but the high dynamic range takes it one step further. You will begin to look at the highlights and shadows in an all new way, adjusting every element down (or up) to its proper exposure in a mental HDR picture before you even begin firing off your trigger release.

I rarely see an HDR photo that is appealing. It is a gimmick of sorts and for me I hope a passing trend. It just isn’t real like shooting moving water with a long exposure that makes the water look like milk.
Anyway that is my two cents worth.

It’s all good! Photography continues to redefine itself, and the concept of HDR has been with us a long time. Graduated neutral density filters was my first attempt at it back in the 1970s. Nothing goes away, or almost nothing, and photography, just becomes more diverse. Almost no no one can like, or dislike all the contemporary renditions of the craft.

Yo Bob: While I sorta agree with you, photography is a gimmick. Get over it and have some fun. Your customers will tell when you crossed over the line.

Old stuff – you need to get over it and move on with what YOU like. I’ve seen GREAT HDR done very tastefully in fine art galleries that will blow the socks off anyone. I’m a stock photographer and
see lots of tastes and address that rather than likes and dislikes. That said, I also have my own style, my own way of seeing my world photographically – that helps tremendously at the outset of any discussion of taste. Enjoy your own .

HDR is only as good as the photographer. It has been overdone, over-saturated – in the hands of other photographers it creates subtle, nuanced and perfectly exposed photographs that more closely mimic what we see in real life. Too many blame the technique for the faults of the photographer.

HDR is a nice tool to make nice pictures. It is also a nice tool to mess up pictures and give them the colors they do not disserve.
I think your pictures are no more real and over saturated.
HDR is used to create more texture in shadows and show what the eye can see and not the lens.
I am sorry for your pictures but too much I have a problem with too much non-natural colors.

HDR Photography is awesome for people in the building community to use for showing off our work. It allows us to show off a really nice chandelier, a dark shaded cabinet, and the view out the window at the same time.

Tiffany, would you mind sharing some recommendations on cameras and HRD processing software? I’ve been looking to get into the personally and am wondering where to start.