Firstly if photography has been your hobby (or worse yet, your profession) for a couple of years now and you’re still calling them Polarizing Lenses, you’re doing it wrong! The beginners and less informed have an excuse but I’m here to set you straight. There’s no such thing. Well, not in the photographic sense anyway. If there were, they’d probably look a little something like this: 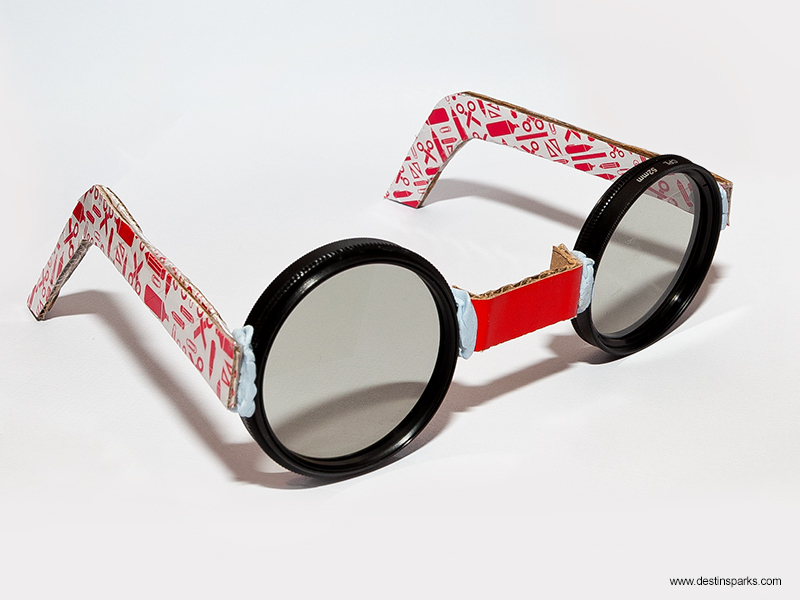 Yep, hardly a fashion statement! They’re Polarizing Filters… or ‘Polarising’ if you will. Half of you probably came here to correct me, good! But stick around you might learn something.

What You Need to Know About Polarizing Lenses

Do you need one? Of course you do. Photography owns you now and life won’t be complete until you have at least one of everything. If you can’t afford one, don’t dare steal one from a friend! Touching a fellow photographer's gear is like punching Jesus himself.

Is a Linear or Circular Polarizing Filter Best for You?

The visual effect they have is the same. There is a technical difference between the two and it has nothing to do with the shape. I’ll try to explain it in its simplest terms.

The way the light passes through either type of filter is different. A linear polarizer won’t work correctly on your fancy auto focus, beam splitting metering photographic apparatus (basically any SLR/Mirrorless with autofocus, digital or otherwise) – they’ll likely give you focusing issues and underexpose everything to the bejesus.

So, for most of you, you’re going to want a Circular Polarizer, Cir-Pol for short or CPL for shorter. Luckily these are pretty much all that stores keep these days.

On the other hand, all you photo veterans out there still walking around with hand held light meters and a manual focus system that belongs in a museum (like me), it doesn’t matter, you can use either.

The most common type is a screw-on, similar to your typical UV filter in that it has an amazing feature – ‘a thread’ to mount it to the front of your lens. The other important feature is the rotating glass element to adjust the polarity. It’s what I use and it’s what probably 99% of others use.

The other type; slot-in. Designed to be used in a filter system like Lee’s or Cokin’s. There really is no major advantage to this system and it’s typically used only when a screw on polarizer isn't an option.

This mostly comes down to a longevity thing. Multicoated Polarizing Filters have multiple coatings. What? Really….? Funny that!

The coatings provide extra resistance against marks and scratching but generally come at a premium. The coatings also help to cut down flare from the sun, though this should seldom be an issue (more on that later).

Do I recommend spending the extra on multicoated? You bet.

What Are the Best Brands for Polarizing Filters?

Hoya, Lee, B+W…….. there are literally hundreds on brands to choose from. Where to begin with choosing one… Well if you stick with one of the aforementioned you probably can’t go too far wrong.

Hoya make a particularly interesting polarizer, the HD. It’s multicoated, scratch and stain resistant (I’ve seen people go at these with scissors) and it comes out trumps. It also transmits 25% more light than most. (That’s a good thing)

Warning! You Cannot Really Photoshop The Same Effect as a Polarizer!

Eliminate the reflections and you reveal the colour. This can only be done prior to capturing the shot.

On your lunch break, do me a favour and stare at bush. Yep, you heard. Sunny or not, take note of the leaves. There’ll be a few that look almost colourless and white. I’m willing to bet it’s more colourful than it leads on. Unless of course you’re reading this in another galaxy, in which case I retract my wager. My knowledge of intergalactic fauna is limited to only that of Avatar.

Side note – send me to take landscape photos on Pandora with the Na'vi any day.

Using A Polarizer – the Correct Way

Polarizers work best when facing 90 degrees from the sun. In other words, midday will give you the best polarized results for most landscapes. (Northern and Southern Pole excepted) Very rarely would you see much effect when shooting into the sun. Should you feel the need, a multicoated filter will help. Here’s an example of the odd occasion when you may want to.

I used a polarizer to reduce the reflections and reveal the lilies in the foreground.

The most annoying thing about polarizing filters (or physics rather) is they’re used mostly for landscapes, as are wide angle lenses. However, you’ll likely regret using the two together. A polarizer on a wide angle lens will do this: 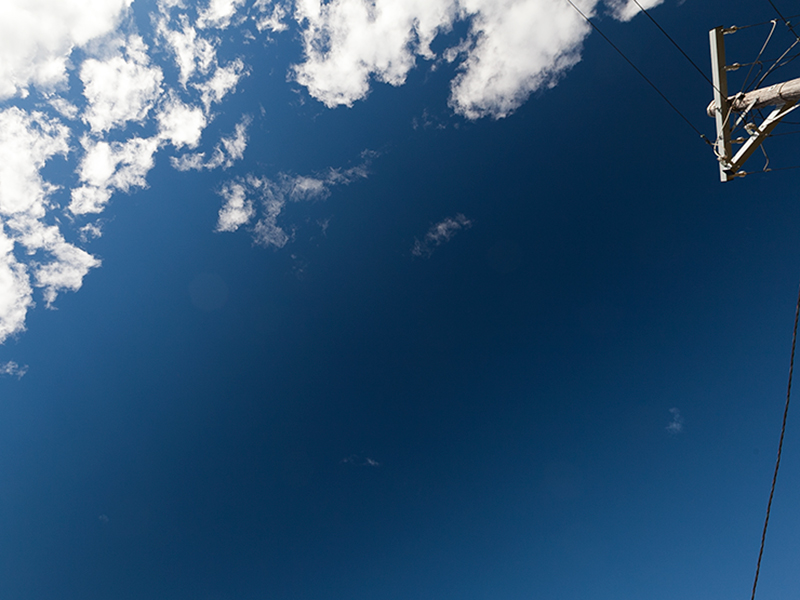 To contradict everything I just said; I use a polarizer a lot and I only own a wide lens. I use it when the sky is not a factor or it's heavily obscured. Beneath the trees! Remember the bush?

Now, if you want to use a polarizer on a wide angle you’re likely going to run into another issue – ‘vignetting’. The more expensive polarizers are often (but not always) a slim filter. If you intend on using a polarizer on a wide lens, definitely invest in a slim one. Again the Hoya HD is one of them.

Well, I hope you’re now up to speed on polarizing lenses, filters. I look forward to seeing your polarized shots and I’ll leave you with one of mine.

Destin Sparks is a self-taught photographer who harnesses the power of digital & film medium format cameras to capture rare and beautiful landscapes from around the world.

Destin shares his knowledge of photography via Photography Tours and Workshops and is a frequent contributor to various blogs, websites and competitions such as the Proify Photography Awards.

It’s a good habit to get into removing the UV but not eessential. The loss in quality from the extra glass is minimal but it may introduce extra vignetting.

On an autofocus SLR i.e. Canon EOS Elan. when should the CP be adjusted? Before or after the shutter button has been pressed halfway?

I read everywhere that non manual cameras will have issues with a linear polarizer, but I never had a problem with mine!

Pure and simple. Now I must simply screw the sucker on and go shoot. I never used one so your timing with this could not be better.

I use a UV filter for lens protection. Should I remove it or may I simply use them together?

remove it if using the two together causes the rim of the filters to intrude into the shot. If not then put the UV over the CP as the UV costs less to replace.

I read somewhere that by stacking a linear and a circular polarizing filter will act as a variable ND filter. Is this true? Will it give me problem with autofocus as you mentioned above?
Thanks!

It is true, and it doesn’t have to be a linear with a circular. Any two polarising filters with work, such as two circulars.

No one ever mentions the Nikon thin polarizing filter. Love your writing.

It’s a great filter, especially the Version 2 which is now much thinner but also more expensive

One thing to remember though, apart from Nikon logo on the outside rim, there’s nothing “Nikon” in this filter.
It is an OEM part made in Japan by Marumi for Nikon. It’s basically a DHG Multicoated PLD thin polarizing filter which you can source for about 40% less than the one with the Nikon logo.

How wide is “wide” related to negative effects upon the sky? I’ve seen this before on a 10-22mm lens on a camera with a crop sensor. Any rule of thumb to follow?

Thanks for your comments and questions. Deejayk, whilst I haven’t tested this, I came to the same conclusion. Focus issues would only be apparent with Phase detect systems (not contrast) However a lot of newer mirrorless systems are now incorporating Phase Detect Auto Focus like the Sony Nex.

Also, this will only bypass the focus issues not the metering ones. I didn’t go too deep with detail but I know a few cinematographers with linear polarizers. They work completely manual so it doesn’t matter.

The Nikon filter is indeed a good filter but typically hard to find in comparison to the other brands. Drazen B also makes some good points.

Jamesdmo, there’s no hard and fast rule about how wide you can go though generally speaking 35mm on a crop camera is a safe bet (50mm for Full Frame). It can also be reduced by dialing down the polarization either with the angle of shot or rotation of the filter. I also recommend shooting portrait orientation if a polarizer is a must.

This web page was referred to me regarding a question I had posted on DPReview about CPL vs LP filters on SLR/SLT cameras vs mirrorless cameras. I think you have made 2 errors in your information.

You state: “A linear polarizer won’t work correctly on your fancy auto focus, beam splitting metering photographic apparatus (basically any SLR/Mirrorless with autofocus, digital or otherwise) – they’ll likely give you focusing issues and underexpose everything to the bejesus.”

I believe a linear polarizer WILL work on a mirrorless camera because there are no beam splitters in the optical path. Further, the interaction between the linearly polarized light from a LP filter and the beam splitter’s (linear) polarizing property can only DECREASE the amount of light reaching the metering sensors. This would cause the camera to OVEREXPOSE the image, would it not?

If you think I have this backwards, please provide an explanation for your interpretation of the situation.

Hi. I’m new to digital photography. I love my Canon EOS Rebel and am only shooting in the Auto Focus mode. I’m guessing my purchase of a CPL filter is useless unless I venture to Manual mode?
Thanks.

No, it will work ok on your camera too.