Film is enjoying somewhat of a renaissance in recent years, the manual labour and thought processes required in creating an image without the ability to refer to a screen, being attractive to photographers who wish to learn more about their chosen craft.

Some, post digital photographers though may have been put off by the perceived complexity of processing their own black and white film, deterred by the notion that you need expensive equipment and a dedicated darkroom. In this article we will explain how easy it is to process a black and white film and dispel some of the myths.

Getting the Right Gear

First of all let’s have a look at what you need. You will process the film in what is known as a drum. It is basically a light tight container in which you pour  and drain the chemicals. The film sits in the drum on what is called a spiral. This is, as its name suggests, a plastic or metal spiral around which the film is wound, keeping it separated from itself. Most modern processing drums include a plastic spiral that is loaded by putting the film tip at the beginning and twisting and turning one end of the spiral to gradually load the film. Older, more experience film enthusiast often prefer the metal spirals as although they are more tricky to load initially, with experience they can be loaded much quicker. Removing the film from its container can be done with a dedicated tool, or if you prefer a simple beer bottle opener will do the same job.

One of the myths we expel now, is the need for a darkroom. You do need a dark space to load a spiral but this can be an entirely light tight bag or at a push, under the duvet of a darkened bedroom. Once the film is loaded on the spiral and placed in the drum, the entire process takes place in light.

Thinking About the Environment

So once the film is loaded, it's time to process and here we can dispel another myth, that you need precise temperature control. Whilst it is true if you want highly consistent results across a range of similarly exposed films, in reality most black and white processing can be done at a room temperature of around 20C.

There are three chemicals required, the developer, the stop bath, basically a chemical that rapidly stops the development and the fixer which effectively preserves the developed image and washes away any unused silver halides left in the film after development.

There are a number of different developers to achieve different effects such as high contrast or low contrast but each manufacturer provides a spec sheet detailing how to dilute your chemicals and the recommended temperature.

The developer is the most temperature critical of these, and if you are in a hot or cold room, the best way to get the developer close to 20 degrees is the measure the required amount into a measuring cylinder, it's worth having three of these, one for each chemical, then placing the cylinder in a bowl or sink full of water at 1-2 degrees above the required temperature, you can use a household thermometer to confirm the temperature. This way by the time you have loaded the film, the temperature will be almost spot on.

The developer is simply poured into a light tight valve on the top of the drum. You will need to agitate the developer according to the specifications, this is usually done by gentle swirling the drum to rotate the developer. Care should be taken with this action as do this too fast can create air bubbles leading to uneven development. Once you have reached the required development time, pour the developer away and add the stop bath.

Repeat this for the fix. You can open the drum around about half way though the fixing process to check the film. Fixing is fully completed if there is no milky whiteness left in the film.

Now its time to wash the film, this can be done either with the drum under a running tap for about 20 minutes or by filling the drum 2-3 times and gently agitating it. Either way, you need to make sure the water temperature is broadly similar to the chemical temperatures. 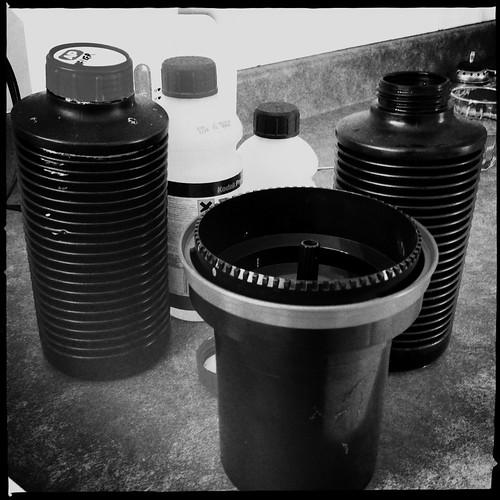 The last stage, drying can be the most difficult to get right. Gently remove the film from the spiral in a dust free environment. Using a special film squeegee, gently clear the excess water from the film moving from top to bottom, then hang the film, again in a dust free area, from a line, adding a small weight at the bottom to prevent the film curling. 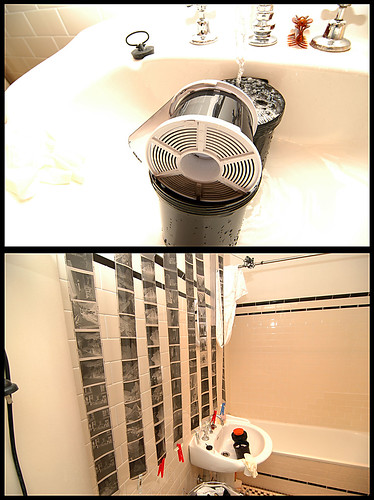 Hanging them out to dry by ManWithAToyCamera, on Flickr

Once dry, you can carefully cut your negatives into strips and put them into archival sleeves for protection. Using a good light-box and a loupe you can decide on which ones to either print or scan to a digital file.

And there you have it, a fairly minimal outlay for a very rewarding and simple process. If you are still daunted by it, I will leave you with this thought. In the days of film photo journalism, photographers with a scoop or exclusive who wanted to get ahead of the pack, would develop their films still in the cassette, and using a pencil to revolve the film whilst it sat in in a tea or coffee mug of developer. It wasn't perfect but it got the results quickly.

Thanks for featuring one of my pictures 🙂 interesting article, i will link it in my blog 🙂

You should mention the hazards (environmental and otherwise) of simply “pouring the developer away.” Most folks, I would think, would interpret that to mean “down the drain.” Doing so is NOT a good idea.

Certain photographic chemicals are EXTREMELY hazardous to the environment, and can disrupt (or destroy) bacteria levels necessary in a septic tank for it to work properly, for instance.