Back in August, LightStalking shared a link on Twitter to some really incredible double exposures done by an artist named Dan Mountford. Admittedly, I'm a huge fan of double exposure photography–something I picked up in my forays into Lomography, but Mountford's work took my appreciation of the art to an entirely different level. If you haven't already checked out his work, be sure to do so!

The images are made by exposing a single frame twice. Of course, the convenience of Photoshop makes this technique rather simple to do, but that's just not as fun as doing these in camera. Some DSLRs have the feature built-in, such as the Nikon D7000. Just check your camera manual to see if your model has it. Otherwise, pick up a film camera. It's easier to use one that lets you take multiple exposures, but if it doesn't you can always expose the roll once, rewind it, and shoot the frames again.

There are also a few apps that will allow smartphone and tablet users to create multiple exposures, but on many of these you will not be able to use manual settings.

How to Attack Multi-Exposures in Shooting Mode

The camera end of shooting these types of portraits is really the easy part. You'll be taking two exposures per portrait. The first exposure will be a silhouette of your subject and the second will be the texture or secondary scene that will fill out the portrait and give it character.

Keep in mind that you want the background of the silhouette to be blown out, so shoot facing the sky or another bright background. Meter for the subjects face and make note of the shutter speed. Since we're making one photo out of two, we'll want to stop down one stop for each of them. To do that, simply multiply your meter reading by two and take the pair of exposures using the sum. So, if you metered a shutter speed of 1/100 for the silhouette, shoot both exposures at 1/200. In essence, the combined shutter speed for both exposures should equal the original meter reading.

Get Your Composition Just Right

This is where things start to get a little troublesome. Because you will not be able to see the the first exposure while taking the second, getting the alignment right can be trying to say the least. One tip that I have found incredibly useful is to turn on your LCD viewfinders grid to use as guides. For example, line up the subjects eye with one of the intersection points on the grid. This way, if you wanted it look like a flower was sprouting from the back of the subjects head, you can use that intersection point as a reference to frame the flower. 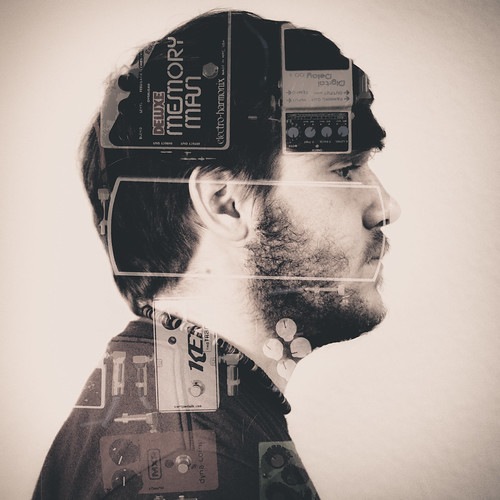 i am my music. by Robert Conrad Photography, on Flickr

A Few Things To Remember

Hopefully, you'll have very little adjustments to make once you've made your portraits, but if you do want to tweak the exposure a little this can easily be done in any photo editing software. It is worth noting, however, that even though there are multiple exposures, the file your camera sends to the image editor will be a single layer, meaning you will not be able to fine tune the exposures individually.

Tiffany Mueller is a professional music and fine art photographer. She has been published in various publications including magazines, art journals, as well as photography books. Tiffany is fortunate enough to have been in a perpetual state of travel since her youth and is currently working on a 50-states project. You can keep up with Tiffany via Twitter, Google+, or on her personal blog, Life Is Unabridged.

This can also be done (actually) in one exposure using bulb mode, albeit a touch more challenging !

Is this easier to do on a DSLR or a normal SLR?

I’d say it depends on the camera. If you have a film slr that lets you expose a /single frame without having to rewind the film, then it’s about the same amount of trouble. The less time you spend in between exposures, the easier it is to remember its framing and get the second exposure just right.

I had fun with this. I used a flash in the dark to produce the image.

which film camera would you recommend for taking in-camera multiple exposure shots? can’t wait to test this out!

Any film camera that doesn’t force you to advance the film every time you take a shot will be the easiest. Many of the Lomo cameras, like the Holga, will let you do this!

Olympus has had that feature in all their cameras since they came out with the mirrorless models. I think that it is way easier to use the digital format but to use a film era lens and adjust in camera using aperture priority. You see your image as you take it which to me is really cool. I shoot double exposures all the time on my Olympus EP2 and my favorite film era lens for it is my Nikon 24mm non A1 from the 60’s….those two just rock together!