You have no doubt seen images such as the one below. These diorama-like scenes are often described by their creators as “tilt-shift” images — a not-entirely-accurate description, but one that certainly gets people wondering what this whole tilt-shift thing is all about. 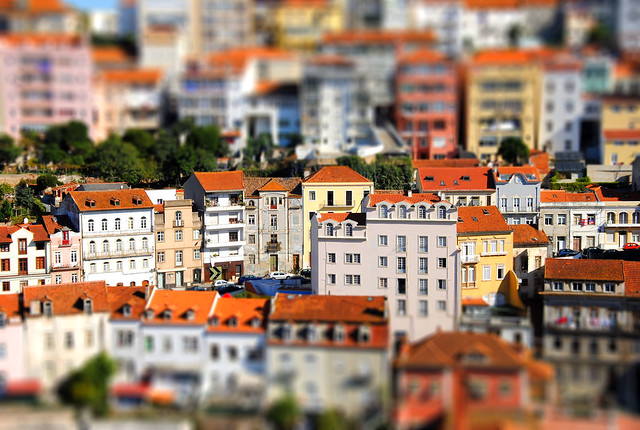 Many of the miniature images we encounter online are faked; they are created, in short, by using software to selectively blur parts of a photo that was taken with everything from the foreground to the background in focus (relatively speaking).

There’s certainly nothing wrong with this technique as long as you’re achieving the desired result, but the reality is such images can’t be labeled authentic tilt-shift images.

It may come as a shock to some, but there are those who know the term “tilt-shift” but have no idea that it refers to a type of lens and not simply a computer-generated visual effect.

Then there are those who have heard of tilt-shift lenses but don’t quite know what they are for or how they are used. If you feel you fall into any of these categories, read on for a brief but useful look at tilt-shift lenses and the amazing things they can do.

What Is A Tilt-Shift Lens?

A tilt-shift lens is one that, quite literally, tilts and shifts in similar fashion to a large format camera, with its independently adjustable front and rear standards and bellows.

While a tilt-shift lens and DSLR combo doesn’t (can’t) have as many moving parts as a large format camera, it serves the same purpose — to circumvent the typical constraints of perspective and depth of field.

A Tilt-Shift Lens In Reality

The same perspective phenomenon rears its ugly head in photography as well, especially when working with wide angle lenses —  structures always seem to be falling back and away. For serious architectural work, perspective is something photographers need ultimate control over.

Landscape photographers, too, face a particularly vexing challenge: how to attain near infinite depth of field (and thus get everything in a scene in clear focus) without resorting to extremely small apertures.

Smaller apertures necessitate longer shutter speeds and consequently increase the chances of blur; they also increase the likelihood of introducing diffraction, which results in softness — these are things no landscape photographer wants.

A tilt-shift lens easily solves these problems of perspective and focus by incorporating in one body two kinds of movement: tilting and shifting. 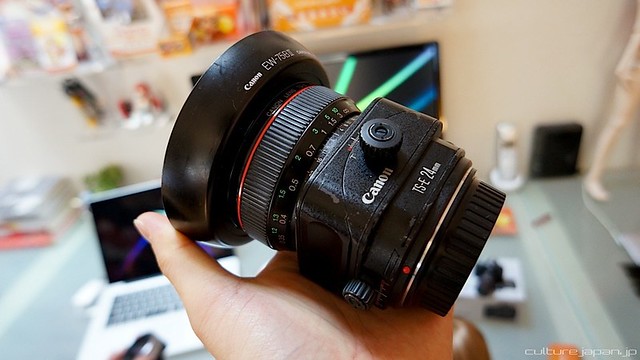 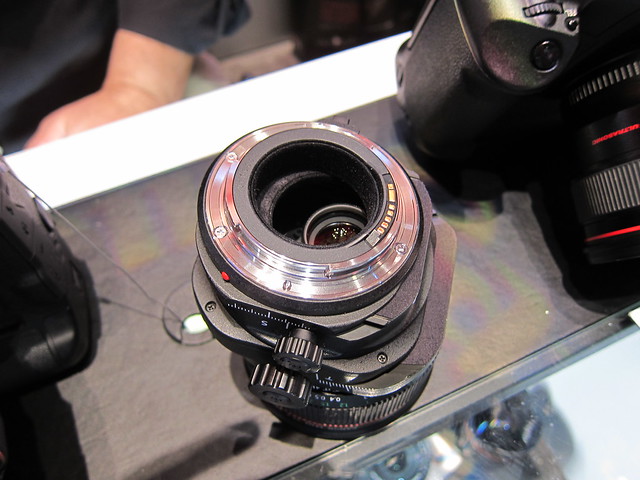 The Tilt Function Of A Tilt-Shift Lens

The tilt movement of a tilt-shift lens allows the lens to “swing” into a position that is not perpendicular to the sensor. This malleability of the focal plane is what allows for greater control over focusing.

The axis of a non-tilt-shift lens is in a fixed perpendicular position relative to the focal plane (sensor or film); it can move forward or backward to create a plane of sharp focus in front of it.

However, if you were using a tilt-shift lens you could, for instance, tilt the lens forward a certain amount to actually move the plane of focus to run along the ground, which would dramatically increase the apparent depth of field and could be achieved at a relatively large aperture, if not wide open.

The increase in depth of field associated with the Scheimpflug Effect is apparent as opposed to actual because tilting the plane of focus causes the image to be in sharp focus at multiple points (front, middle and back) across the subject plane, while depth of field simply refers to a zone of acceptable sharpness for traditional lenses.

The Scheimpflug Effect is also reversible. By tilting the lens opposite the subject plane you severely confine focus to a small point on the focal plane. Everything beyond that point is blurred because it is out of focus, creating the illusion of insanely shallow depth of field.

This is how those highly sought after “tilt-shift” images are made in-camera; they’re actually the result of tilt manipulation — the shift function plays no role here. 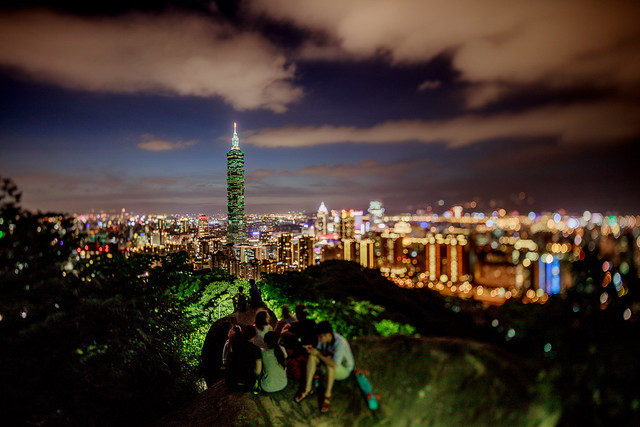 The Shift Function Of A Tilt-Shift Lens

The shift feature refers to the sliding motion (side to side/up and down) of the lens, a motion that takes place parallel to the image plane. Shifting the lens allows a photographer to relocate the subject’s position within the imaging circle without needing to move the camera itself.

Keeping the camera parallel to a building is an essential first step in preventing perspective distortion; with the camera fixed in position, you only need to shift the lens upward or downward to take in corresponding sections of your subject.

A tilt-shift lens achieves this by casting a considerably larger imaging circle than a conventional lens.

While shifting the lens will keep everything upright and “square,” some architectural photographers don’t recommend full-on correction of vertical lines, as some degree of convergence is a natural visual occurrence.

Options For Buying A Tilt-Shift Lens

Tilt-shift lenses are generally more expensive than conventional fixed focal length lenses. Canon and Nikon both produce lenses that retail in the neighborhood of $2000USD (though Canon’s non-L tilt-shift entries retail for about $1300USD). The focal lengths of these lenses range from 17mm to 90mm.

If you want wider compatibility, you might consider offerings from Schneider Optics, whose tilt shift lenses are available in Sony Alpha, Pentax, Phase One, Leica (in the form of a bellows attachment), Nikon and Canon mounts. Be prepared to shell out no less than $2500USD.

For the budget-conscious, there’s the 24mm tilt-shift lens from Samyang/Rokinon. The lens is available for Nikon, Pentax, Sony Alpha, Sony E and Canon bodies, and retails for $799USD.

The Software Solution To A Tilt-Shift Lens

Photographers who don’t specialize in architectural photography are generally content to leave their distorted buildings as is, but for those who want to be able to exercise perspective control over the converging lines in their shots without breaking the bank on a lens that will see limited use, image editing software strikes a happy medium.

Distortion correction as implemented in applications like Lightroom is incredibly effective in most cases. While it may not be perceptible while viewing a corrected image on your monitor, be aware that you do lose some image resolution after the software has done its thing.

Photo by moon Symphony Before & After software correction

You can also get acceptable results when using software to make fake miniatures, but now you’re equipped with the knowledge that these are tilt-effect images.

It’s worth mentioning that for those who would like to experiment with the creative options opened up by a tilting lens but have no need for the shift function, Lensbaby makes tiltable lenses that produce some pretty cool results at far more attainable price than a full featured tilt-shift lens. 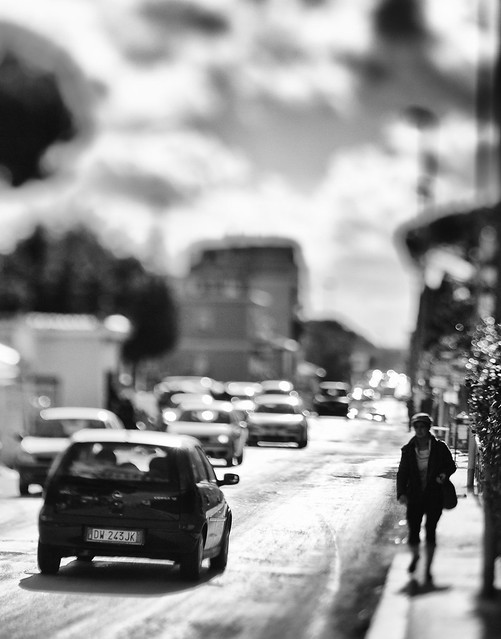 A tilt-shift lens isn’t a must-have for most photographers, but it’s a tool that can conveniently open up a wide range of creative possibilities (in addition to the uses mentioned above, a tilt-shift lens also allows you to shoot into a mirror without you and your camera appearing) — or you could go out and get yourself a not-so-portable large format camera.

Keep in mind that, as with any specialty lens (macro, ultra wide angle, etc.), there is a learning curve associated with using a tilt-shift lens. For further guidance check the resources below.

Pretty good article, but misses some important points and alternatives.

For example, the article covers DSLRs but neglects “mirrorless” cameras. This is particularly relevant here, because you can fit a LOT of hardware between a mirrorless camera body and a legacy lens.

For example, a cheap EF-m4/3 tilt adapter is only $40.00; that’s a significantly lower cost to play than any of the suggestions made in the article.

Very informative article, thanks! One quick question that has been bothering me: Is there any difference between using the shift feature of such a lens rather than just adjusting the height of the tripod accordingly whilst keep the camera sensor parallel to the subject?