Just it’s name suggests cigars, 1950’s cars and of course Fidel Castro. Situated just 90 miles south of the Florida Keys, yet for all intents and purposes a different world, Havana is a photographer’s playground. From its people to its history, the city is so intensely rich in photographic possibilities, that it would be impossible to detail them all in this article. Instead I will concentrate on the most accessible points in the city center.

Old Havana, as it is known in English, is perhaps the most tourist centric part of the city. It is here that the most redevelopment and regeneration has taken place. The narrow streets are full of lovingly restored Spanish colonial buildings including  the beautiful Havana Cathedral which  looks over a small square, and provides great photographic possibilities. On the opposite side of the square from the Cathedral is a gallery, where you can get upstairs to get a better angle of it.

Plaza San Francisco is a beautiful square a short walk from the cathedral, with a basilica and beautifully restored buildings, best shot at dawn where the rich golden Caribbean light fuses with the yellow stonework of the buildings. 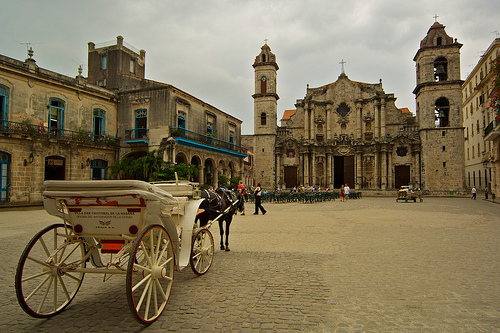 The Cathdral of Havana

It is near here that you will find the distinctive Santeria women. Dressed all in white and often smoking huge Cuban cigars, they are a must on any photographers list. Be warned however, whilst the women are very happy to be photographed, they will expect some payment.

The main street through Old Havana is Calle Obispo, a narrow street that is full of life, both Cubans and tourists shoulder to shoulder. It is here that you will find the hotel Ambos Mundos, where Hemingway spent many years and wrote For Whom the Bell Tolls. Whilst difficult to photograph from ground level, the hotel has a terrace on the 7th floor with some good views over Havana.

At the top of Calle Obispo and considered the city center, Parque Central is another photographers paradise. In this tree shaded square you will find the classic Hotel Inglaterra and the GranTheatre de Havana both incredibly photogenic buildings. The square is also a great place to get shots of old American cars both in stationary and in motion as well as the unusual Coco Cabs, a three wheeled taxi unique to Havana. A ride in one of these can be exhilarating as well as a great photographic opportunity. The Hotel Inglaterra also contains a roof terrace bar with great views over Parque Central and down to the seafront.

American Classic in the Rain near Parque Central

At first glance you might think that you are in Washington DC. Havana’s former parliament, the Capitolio was copied from it’s US counterpart yet is actually bigger. It is an iconic photo stop on any trip to Havana, with many angles to shoot it’s superb facade and dawn providing the best light of the day. Inside is now a museum and is well worth a look. You can have a personal guided tour for about $2 and there are no restrictions on photography. It can be quite dark so you will need a fast lens and or a high ISO. Take a good wide angle to capture the inside of the magnificent dome. The Capitolio is a short walk from Parque Central.

This massive square is a 10 minute taxi ride from the Capitolio and photographically it is relevant for two things. The massive memorial to Jose Marti that towers over the square and another of Havana’s iconic structures, the Ministry of the Interior, which features the famous mural of Che Guevara, which is based on the famous photograph by Alberto Korda. Some great shots can be had shooting wide angle and capturing a 50’s car with the mural in the background.

Sometimes you need to capture the cliches

The Cuban people are incredibly photogenic, the mixture of many races from African, Carib Indian, European and even Chinese has created a melting pot of different and unique looking people. Mix this with the incredible hospitality and vivacity you have the recipe for some great portraits. Cubans are very approachable and nearly always happy to have a photograph taken, but do have the courtesy of asking them first. Cuba is a very poor country and you will find that more often than not you will be asked for money, this is entirely you decision and generally you will not be pressured. Also be aware that some Cubans see tourists as a form of income and will hassle you for various things, being firm but polite will generally stop the problem.

Baseball with a stick and stone

Old lady in the crumbling streets of Havana Centro

The place to photograph people is the Malecon, Havana’s famous sea wall. At sunset, it is a truly magical place, the golden light lifting the pastel colors of the crumbling buildings, the rumbling V8’s of old American cars and the beams from the lighthouse of El Morro combine to make this a photographers dream. It is here at sunset you will find the Cuban people, socializing, practicing musical instruments or drinking Havana Club rum whilst listening to Son on an oversized stereo. A wide lens will capture the full sweep of Malecon whilst a good telephoto will let you concentrate of isolating those defining details. On some evenings the light of the setting sun can be incomparable, the rich yellow reds making for some great silhouette shots or intense portraits.

There is plenty of information available about getting to and from Havana and it’s modern airport is served by a number of international airlines. Travel restrictions for US citizens are easing significantly and be sure you have up to date information. For most people you will require a tourist visa, usually this can be provided by your travel agent on online from the Cuban embassy in your country, they are not expensive and are processed quickly.

For photographers, Havana is a very safe and tourist friendly city. You will find a police officer every few hundred yards and crime is very low compared to many Latin American countries. It is also a very poor country, so don’t flaunt your cameras and other equipment, although unlikely to be stolen you a may attract unwanted attention.

All in all, Havana is one of those place that should be on the list of any photographer interested in travel images.

A very nice post. I am a photographer who have been photographing Cuba for a very long time (first time in 1991 and most every year since then I have been back). You, Jason, have picked a handful of place that indeed are great for any photographers. Of course Habana has a lot more to offer, but you cover the essentials when it comes to street photography. I would just like to add that for anyone who goes to Cuba, Habana is in many way not the «real» Cuba. You need to go out into the countryside to get a feeling of what Cuba and Cubans are like. Unfortunately Habana has been too much negatively affected by tourists and opportunistic possibilities.

Hi, I will be visiting Cuba for photography, from your comments, could you share some of the countryside locations that are world working some good shots or “traditional” Cuba? It will be my first time in Cuba.

Many thanks! Vicky (Singapore)

Thank you for a very interesting and provocative article. I think because of it, I would like very much to spend a week or so photographing the Cuban lifestyle. As a retired airline pilot, I have had the occasion of talking with Havana control on the radio many times and the contacts were professional and more importantly, friendly. I am going to investigate what is needed for my wife and myself to visit Cuba next year and if it works out, I will have you to thank.

Thank you for your sunrise location advice!

How much do you normally tip someone that you photograph in Havana?Do you give cuban tourist money

Great pictures, mainly the last one, the sunset in the malecon.

Havana is a paradise for take pictures, mainly speaking about portraits of people, in other countries is imposible to do it.